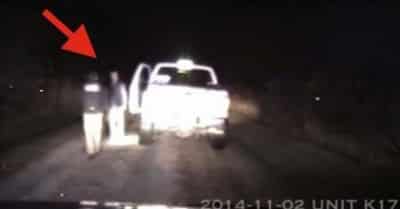 Police dogs are some of the bravest dogs you’ll ever find. They are well trained and know how to save people from impending danger. The training process itself can be quite overwhelming, but once these brave dogs know how to identify a criminal, they’re ready to even sacrifice their lives to save ours. This is the video of such a brave police dog named Blu.

This video shows an officer pulling over a suspect car and approaching the driver for questioning. He then noticed the driver attempting to pull a gun, there was also another man who tried to sneak up behind the officer. He was cornered… but then his canine partner, Blu the Beligian Malinois came to his rescue. Watch what he did next in the video below… scroll down…

This was a training session for the deputy faced with a scenario and how he reacts under tremendous stress along with his K9 partner. The deputy along with his dog has no idea what situation they might be in, thus this allows for a high level of stress needed to train the cops for such unpredictable and high-risk situations. The K9 performed his duties perfectly. The deputy took care of the man with the gun while the K9 attacked the other man with the weapon, and their outstanding team work saved the day! Well, yeah it’s a training drill, but now both the officer and the dog knows how to react in such critical situations… and that is something!

Did you like watching this intense showdown between the police dog and criminals? Let us know what you think, leave a comment below!