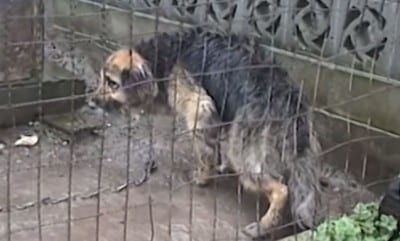 As soon as you read the headline, you understand how tough it has been for a dog to have been chained for 10 long years! She was abused, emaciated and injured and was passing the time without even the simplest of comforts. Chained in a fenced enclosure, be it snowy cold nights or muddy rainy days, she never had a place to even rest her head. Finally the unfortunate dog was rescued. See the following video how she gets rescued and gets a new life…

When Judith was rescued, she was emaciated, very weak and she barely could walk. Her cruel master didn’t take care of her nor did he give her foods. She got no love no affection from there. She had no place to even sleep! The neighbor told that her master used to urinate on her from the porch. I can’t imagine how pathetic it must have been for Judith. Then the rescue team gets to know about her. That is how she was rescued from the hell. Then she was taken in. she was bathed and her muddy-tough-fur was shaved off to make her back less weighty. Now she could move about freely but with years of abuse and neglect, her hips were damaged and she had permanent limp on her hind legs.

Judith was finally adopted by a new family. But sadly she enjoyed her new family only for 18 months before she passed away due to old age complications. But those 18 months were the best times of her life.