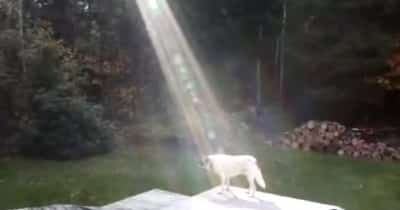 This dog belonged to fallen army specialist Justin Rollins who was killed in Iraq.  ABC news ran a story about Justin in which they showed a photo of him holding a little pup the night before he was killed.  This inspired his parents to ask the army to help them find the dog and bring it home to them.  As fate would have it, the army was able to find the dog and bring it to Justin’s family in New Hampshire.  Now they have the dog that brought Justin so much happiness.  ABC news sent a camera crew over to interview the family and take some video of the dog and what happened next was simply amazing…  The video on the next page shows what happened: