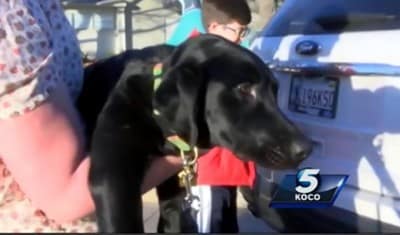 Sometimes our beloved dogs eat things that they’re not supposed to… But how would you feel if your wedding ring was eaten by your dear dog? Of course, you wouldn’t know, cause it has happened only once in the history of mankind! When Sierra – the black Labrador dog ate her owner’s two wedding rings… Little did she know how much the rings were worth! Watch the following video to get the full scoop on the story…

The owner of Sierra, Stephanie Lamb has two dogs. That night these two dogs were hungry and apparently they were looking for some snacks. But they didn’t get any snacks rather they got two costly wedding rings worth $23,000! And one of dogs called Sierra ate both of them.

Stephanie Lamb said “I saw my dogs near the coffee table and remembered I’d left my wedding rings sitting on the table. I knew it was Sierra because she’s just a little bit of a troublemaker.”

As soon as she got to know that her two rings were gone, she hunched that her dogs might have eaten both of them. So she hurriedly took both of the dogs to the hospital and got their x-ray done. From the result, she found out that it was Sierra that ate two rings together.

As the ring’s elements are too much toxic for Sierra’s intestine and could potentially get stuck into her stomach and prove to be fatal, the doctor suggested that Sierra go into a surgery so that the two rings can be removed from her belly. Later on, doctor performed a surgery on Sierra and it was successful; he retrieved those rings as well. Finally sierra returned home and Stephanie also got back her two precious rings.

So this video must have been a warning tool for you. Keep your valuables away from you dogs! Who knows when they wolf them down! Then again, we love them… and they can always melt our hearts with their cuteness even when we’re mad at them!