A Canadian man served as  a guardian angel for one lucky dog. This poor puppy was tied up in a garbage bag and left to die.

Aaron Katz was walking home from work, and he happened to take a back street instead of his usual route. He heard a faint yelp. He decided to follow it to see where it came from. Aaron looked down, and noticed the sound was coming from a garbage bag on the side of the road. The bag began to move. He was understandably hesitant to open the bag, but thank goodness he did.

When he untied the garbage bag, he was shocked to see a scared little German Shepherd puppy. He could not believe his eyes.

He picked up the dirty and freezing puppy, and brought her to his car.

When Aaron got the dog back to his car, he had several emotions running through him at once. He felt relieved that he was able to find and save her, but also angry and confused about why someone would do this to a dog.

She had no collar or other identification, so he named her Elle and took her home. He contacted the Humane Society to let them know he had found her. No one was looking for a German Shepherd Puppy.

They alerted animal services, and everyone decided it would be best if Aaron kept her. She fits right in with his other dogs. It is a good thing that he found her when he did. 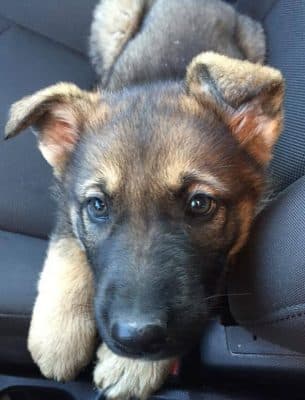