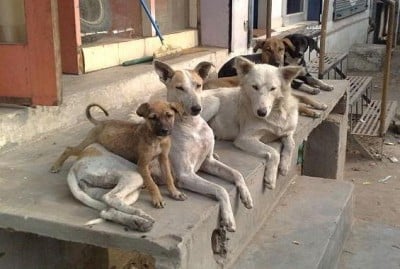 This story serves to prove once again that dogs truly are a man’s best friend. They act as our guardian angels at times… and nobody knows it better than this 12 year old Argentine girl who was saved by five stray dogs after a man attempted to rape her. How the dogs did it is simply amazing!

The incident was reported by the Martin Grande’s 89.9 FM Radio station in Argentina. The 12-year-old girl was walking alone and on her way to her Aunt’s house, when the attacker grabbed her from behind, covered her mouth and dragged her to a nearby secluded location.

When he tried to rape her, the girl screamed for help which drew the attention of the nearby stray dogs. Amazingly, the dogs ran to the spot to help the poor girl. They immediately began to bite the perpetrator in an attempt to save the girl and the young girl was able to break free during the distraction and run to a neighbor’s home. The neighbor called the police who came and reunited the girl with her parents. Police were unable to locate the attacker and it is unknown at this time as to what happened to the dogs. But one thing’s for sure, these dogs will forever remain as heroes in that girl’s heart.

What did you think of this amazing story? Please let us know in the comments section!

And let’s SHARE the news with your friends and family so that they will know about these brave and life-saving guardian angels of our lives!