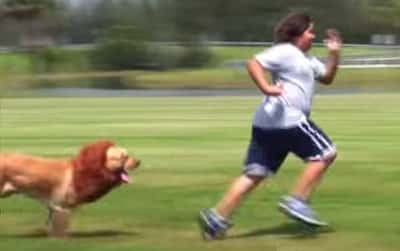 Dog owners come up with so many silly ideas to play with their dogs. But actor Geoff Ward does something that nobody has ever done! He made his yellow Labrador dog named Duke wear a lion mane that made him look like a 1 year old lion. What did he do next? Well, cause terror in the public parks of South Florida, of course! This prank video is hilarious beyond imagination! Watch it below…

That really was a creative way to use your dog in a prank video. The dog was playfully running and approaching strangers, while completely oblivious of the fact that people were scared to death watching him running after them! I wonder what I would’ve done if I were to be in such a situation.

Let us know what you would do… Share your thoughts in the comments section!

Also Don’t forget to SHARE this hilarious video with all your friends!