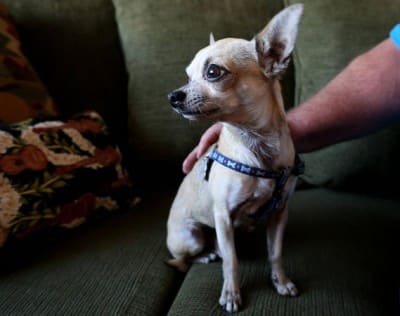 Two Mondays ago — five years after Jake went missing — Thomas received a phone call from a veterinary clinic in Manteca, California. Jake had been running around the streets of an apartment complex in Manteca when someone picked him up and took him to Forpetcare Veterinary Hospital. Workers at the clinic scanned the dog for identification chips and linked the dog to Thomas. According to Forpetcare policy, any animal found will be returned to the owner on the chip, regardless of what tags say. “Shocked,” Thomas said of his reaction when he received the call. “I’m just happy to have him back.”

Home Again, the pet microchip company that Jake was registered under, paid for Jake’s $243 flight back home from Sacramento.

The dog was wearing a harness with tags that indicated it had received rabies shots in Idaho, which is where Thomas and his former girlfriend bought Jake. It is unclear how Jake made it to California.

Although he’s forgotten how to stand and shake hands, Jake still responded to his name once back in Salt Lake City and cleared the jump from the ground to his owner’s SUV on command.”

Finding a missing dog after so many years is simply amazing and gives hope to others who have lost their furry friends.