Leo the dog lost both his hind legs in a motor accident. His owner also abandoned him. Due to the excessive ground contact on the hind legs, they developed friction wounds… covered in parasites and malnourished Leo had no chance of survival on his own; Until Meagan found him. This is the heartwarming story of how Meagan changed Leo’s life forever! Scroll down to read the amazing story! 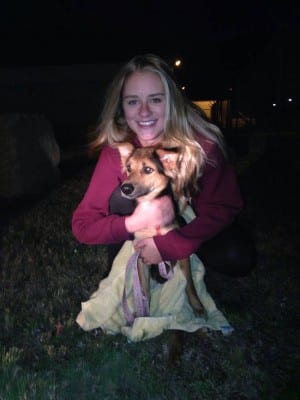 Meagan Penman was holidaying in Thailand when she saw poor Leo dragging himself pitifully across the sand. She was devastated to see a dog in such a bad shape. She could’ve easily overlooked it and moved on, after all she was in a foreign country! But Meagan tried to help Leo by contacting the local dog rescue facilities but none wanted to take care of Leo. While most others would’ve helplessly left the poor dog there, Meagan with her heart of gold, decided to take Leo back home with her, in Canada!

First she took Leo to the vets for primary medical checkup. She returned back in Canada while the vet looked after him and nursed him so he would be fit enough to travel. In the meantime, Meagan set up a fundraiser to help with the expenses. Dog lovers all across the world made sure the fundraiser was a huge success and Leo was in no time with Meagan, in his new home in Canada, all the way from Thailand!

HIS FAMILY ABANDONED HIM?

God Bless both of you