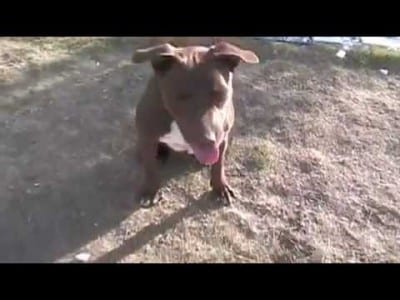 This is the story of a pit bull dog named ‘Judy’ who will amaze everyone when she proves how powerful second chances can be. She was dying of starvation and abuse… she arrived at the doorsteps of a kind man. And then Judy’s life changed forever…

Pit bull dogs are sometimes perceived as aggressive and even called horrible things like “baby-killer” or “monsters”, that’s a very wrong perception. If they’re raised and trained properly, they can be just as good as any other dogs. After you watch this video you can understand how intelligent and helpful these dogs can be… Scroll down and watch the beautiful video below…

One year ago when Judy’s rescuer found her, she was abandoned and emaciated. She was dying of starvation and gave up the fight for life. Judy’s rescuer, at the first place, was reluctant to help her when he found her at his porch. Because at that time, he had a wrong notion that this kind of dog was not very good as pet… They were impulsive, untrainable and vicious. But his sister telephoned him and told him to give the poor dog a chance. Then he adopted her and started taking care of her. One year later what happened you have already seen in this video.

Judy not only is an intelligent and well-trained dog but also a good company that gives sympathy after the death of the sister of his rescuer. When the sister committed suicide, it is Judy who reminds the love of the sister to his rescuer. Judy’s rescuer thinks that Judy is the last gift given to him by his late sister.

What do you think of this beautiful video? Did it warm your heart just as it did mine? Leave your comments below please!

Have an awesome day!!