Cora is a special dog. She is in training to be a therapy dog. As a result, she gets to travel a lot.

“She is very empathetic and in tune with my needs, yet she is so incredibly independent,” said owner Madison Palm.

Cora did something amazing while they were flying from Idaho to Alaska. On a layover in Seattle, Cora left her owners side to visit a man sitting by himself.

“Before I could even call her she was already at his feet being loved on. I asked him if she was bothering him,” Palm said. “And with a somber face and watery eyes he said, ‘No, no. I lost my dog last night.'”

Cora stayed with him for a while. He scratched her, petted her, and whispered to her.

“I truly think she has a gift. She knows who is hurting and she knows who needs her,” she said. “Once he told me that his dog passed away I looked at Cora and I thought to myself, ‘You are so amazing. How did I get so lucky?'” 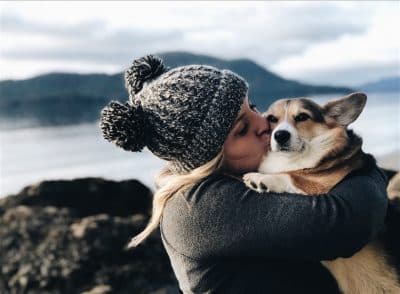 In some ways it was Cora who was lucky. A co-worker told Palm about a corgi that was being given away because they wouldn’t stop eating the family’s chickens.

Palm left work to meet the dog. When she arrived, it was clear the dog was underfed and had lived outside her whole life. She’d had several litters of puppies.

“Cora had never been to a vet,” she said. “She didn’t have a cute collar or a shiny tag with her name on it. The little food that she received was her owners’ scraps, which were thrown into the yard for her.”

Palm already had one dog, and her landlord wouldn’t allow two. So she moved.

When she was taken to the vet, it was discovered that Cora’s ears were infected and her teeth were rotting. The water was black after her first bath.

“She just wants to be loved on and held all day long,” said Palm. “She is always right next to me and always keeps a close eye if she’s not. If I’m not available she’ll pick the next closest lap to sit in.”

The new home was a step up for everybody. It allowed for two dogs, and had a yard.

It had been seven months after Cora’s adoption when she comforted the man at the airport. Clearly Cora’s ability to forgive and love is greater than any of the trauma she experienced.

“I am blown away by her on a daily basis. Who knew a dog who was unloved for 7 1/2 years could have so much love to give?” Palm said. “I can’t change her past but I’m doing everything I can to make up for it.”