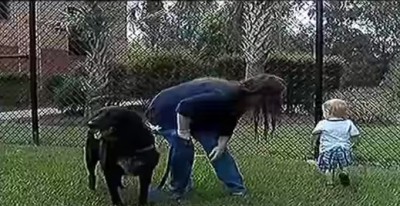 Dogs can be very protective towards the children of the family they belong to. Nobody knows it better than this South Carolina couple – Benjamin and Hope Jordan. When they hired 21 year old Alexis Khan as their 7 month old boy Finn’s babysitter, they never knew it would be such a big mistake. Parents trust Babysitters with their most precious thing in the world, and on very rare occasions like these, they pick the wrong person to take care of the baby while they are away. But fortunately, the Family dog Killian was there for the Jordan family.

When the baby sitter started to show her dark side, the dog started to become aggressive towards her. It wasn’t hard for the couple to figure out what was going on. Scroll down below to watch the full video of how Killian the dog saved the little boy from abuse and helped catch the babysitter red-handed.

It’s really disturbing to find out what the baby sitter has been doing for 5 MONTHS to their little baby boy! But at the same time they realize how important the canine member of their family is. If it weren’t for him, they would have never figured out the problem… Finn was just a little baby so he couldn’t have let the parents know of the abuse. So, Killian saved Finn from further abuse. Not only that but also the babysitter has been put in jail and can only apply for a parole after a year; she’s also been registered in the National Child Abuse Registry, so she won’t get a chance to harm any other child… ever again! All thanks to the love that Killian the dog has for his family.

This story just makes me love and respect my dogs even more; they truly are fascinating creatures and our best friends! What do you think? Let us know in the comments!

And don’t forget to SHARE this story with everyone to raise awareness on the issue!

One reply on “This Brave Dog BUSTED The Babysitter – Wait Till You See What She Was Doing!”