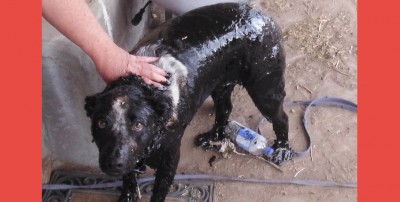 This video is about a little dog who fell into a pool of hot tar that smothered his body and became rock-solid. He was stuck to the ground and unable to move. A passerby saw him struggling and called the help-line of Animal Aid India. How they saved the dog’s life is simply amazing! Watch the video below…

We all know that most developing countries and third-world countries, unlike developed countries, don’t have enough resources to take care of street dogs. Mostly they live in streets/dumpsters and live a life of misery. It was possible that the dog would’ve died because of being covered in tar for so long. But, the rescue workers did an amazing job to save him. It’s wonderful to see how kind people are doing all they can in their power to make the world a better place, and these animal rescue workers did just that.

What did you think of this amazing video? Let us know in the comments section below!

And SHARE this story with all your friends and family!

3 replies on “This Dog Was Covered In Tar And Unable To Move! Watch The Amazing Video Of How These Rescue Workers In India Saved Him!”

People who treat animals in this way should have the same things done to them.

Poor baby, glad to see he is doing better!