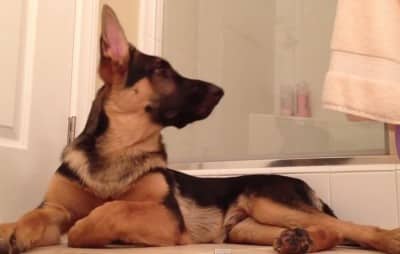 Dogs love to bark and howl and sometimes even like to sing! Meet Maximus, the singing German Shepherd! His owner recently discovered that Maximus liked to howl whenever he heard people singing, so he decided to see if he could capture him on video while singing Eduard Khil’s popular ‘Trolololo’ song. This is what he captured on his video camera… you will find this sooo funny! Watch the video below…

Is your dog also a singer? If you’re wondering why your dog starts howling when you sing, then you must know, dogs are pack creatures and they follow everything their pack leader does. So, in this instance the dog’s pack leader, his owner, is howling so Maximus is joining in, which is a natural behavior for dogs.

But on the downside, it also means that your dog feels your singing sounds like a howling dog… Atleast this is what some people are thinking, judging from their comments on this video that has already been viewed close to 1.5 million times on YouTube! YouTuber DJFrexira noted,

“If you listen closely, it sounds like the pup is going “Nnnoooooooo! Nnnnnoooooooooo!” … I don’t think it is singing with the owner; it’s more like “Please stop please stop!!”

That’s an interesting theory! What do you think? Let us know in the comments!

Our German is very vocal too!