They brought her to a veterinarian where they began to assess the damage and see what could be done to help her. She had multiple injuries and mange. “Julia’s paws were so swollen, her nails were so long… so much discomfort, but it was all about to change.” 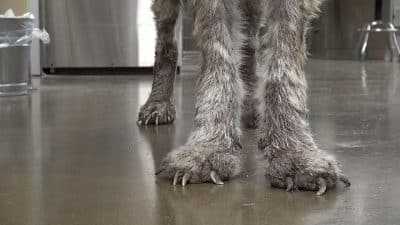 The vet bathed her to treat the mange. As the dirt and blood washed out of her fur, she became less wolf-like and became more like a cute dog. “As the water broke down the scabs, Julia started bleeding from everywhere. This is a necessary step… a medicated bath.” Afterwards, you could tell she was grateful by the way she lay down in Lisa’s lap.

A DNA test revealed that Julia was just a dog, a mix between a German Shepherd and a Husky. Thanks to Hope for Paws Julia has been adopted and has found her forever home!